I decided to get Anya a sarong kebaya to wear for Racial Harmony Day and asked my Peranakan colleague where I should go to get a nice one. She told me about Toko Aljunied, one of the oldest batik stores in Singapore.

Toko Aljunied is apparently quite well-known and they made the sarong kebaya for some TV productions and for the Ivan Heng’s version of Emily of Emerald Hill. The kebaya tops range from $90 to $580.

Since Anya’s still pretty small, she didn’t really have many options but by some stroke of luck, there was one in her size which was also in her favourite colour! She chose a purple batik skirt to go with it. It should last her till Chinese New Year and she can wear it then as well. I made a green and pink sarong kebaya for myself and will probably be wearing it for every single Racial Harmony Day celebration for years to come. 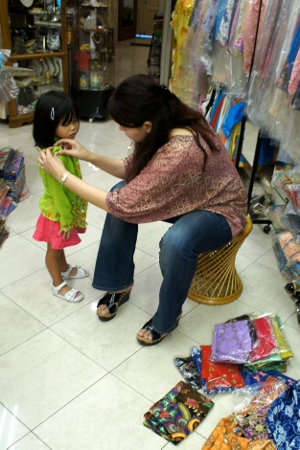 getting the sleeves taken in