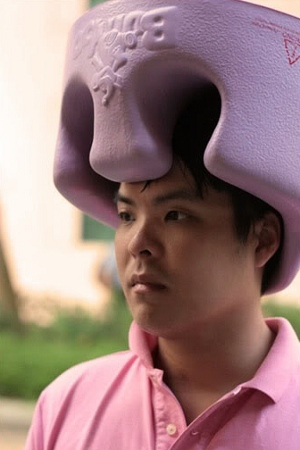 incorrect use of a Bumbo

More than 4 million Bumbo baby seats have been recalled after several reports of babies suffering skull fractures after wiggling out of the Bumbo.

As far as I know, the Bumbo baby seat is supposed to help seat babies who can’t sit up on their own and it does not claim to be a restraining seat of any sort. The Bumbo baby seat also comes with a warning label which states that the seat should not be placed on an elevated surface.

Our little lavender Bumbo has served us very well and both kids have used it happily. If the kid is in the Bumbo, then it is usually placed on the padded mat on the floor. And although we know we are not supposed to, sometimes we put the Bumbo on the sofa or on a low table but ALWAYS with an adult sitting directly beside or behind the kid.

Obviously, once the kid is able to sit up by himself or to wiggle out of the Bumbo baby seat, we switch to a baby high chair with a seat belt restraint. We don’t expect the Bumbo to be able to keep a mobile baby safe because it is not made for that purpose. 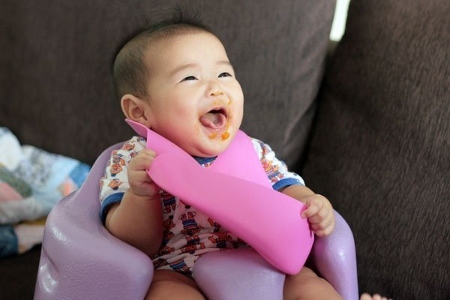 Anya eating carrots in a Bumbo 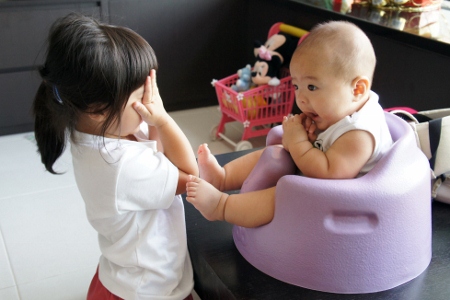 Anya playing peek-a-boo with Adam on the Bumbo

One of my friends shared an article on Facebook about the Bumbo being recalled but added that she thinks it’s fine to use it as long as the baby is not left alone and I completely agree with her. Someone commented on her post that it’s such a bother that babies have to be supervised all the time, which makes me wonder why some people become parents if they think that the basic act of parenting is too troublesome.

I’ve also heard that some people are planning to throw their Bumbo baby seat away. If the Bumbo baby seat is used the way it’s meant to be used, then everything will be fine and dandy. But if an adult can’t figure out how to use a simple moulded foam seat correctly and safely, then yes, she doesn’t deserve to own it and should just get rid of it.

It doesn’t matter how smart or how safe a product is if people cannot be bothered to use their common sense. Just remember: the Bumbo baby seat is supposed to seat a baby, not baby-sit.