Dragged Debs and Simon to Night Festival and we spent a few hours checking out the installations and performances. We went to Night Festival in 2010 but skipped last year’s because it was around the time Adam was born. 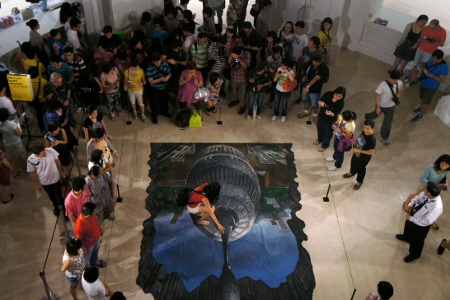 The first thing we did was to take a picture on the 3D artwork by street artist, Joe Hill. It’s supposed to look like Debs and Anya are standing on the dome of the National Museum.

It was quite an interesting and interactive piece but I feel that it shouldn’t have been positioned at The Rotunda of the museum because that’s the main entrance and it got quite jammed there. 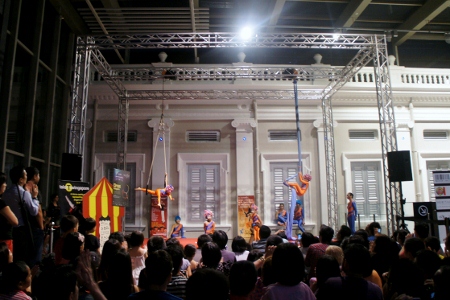 Anya was quite fascinated by the performance and I’m thinking of letting her try acrobatics when she’s 4! I’m quite tempted to run away and join the circus myself.

We caught a glimpse of One Fine Day, a shadow puppetry performance by Paper Monkey Theatre, before we made our way out of the museum. It looked really interesting but the screen was placed quite low and set up in a rather narrow area so there wasn’t enough space for us to stand and watch.

I liked We The People, a visual display by Brian Gothong Tan projected on the facade of the National Museum, but Anya was absolutely terrified of the lights and the loud music so we didn’t really linger there.

There was an Old Chang Kee food truck and a row of stalls selling some traditional food at Stamford Garden outside the National Museum.

There was also a Nestlé 1930s street stall with free cups of Nescafe White Coffee and some traditional games like marbles and chapteh.

Under the Banyan Tree

We settled down on Stamford Green to watch a bit of Labu dan Labi (Labu and Labi), a film that was directed by P. Ramlee. The movie was very entertaining and I wouldn’t have minded watching the entire thing but we were quite hot and tired and wanted to check out some of the other installations.