We brought the kids to Jacob Ballas Children’s Garden last Saturday and they had a good time digging around in the sand and playing with water. I can’t believe it’s been about two years since Anya was there!

trying to play the drums

I’m glad Adam’s not squeamish about sand although he did try to pick up and eat some random objects from the sand.

having fun with sand

I’m always amazed by the little rules that kids come up with for themselves and other children when they are at play. There was a digger that many kids wanted to play with so they had a queue system and also a fixed number of digs per turn.

too small for the digger

We went over to the waterplay area after the kids had enough of the sand and decided to let them run around and get wet in the clothes they were wearing instead of changing them into their swimsuits.

a bit hesitant about getting wet at first

dancing in the water 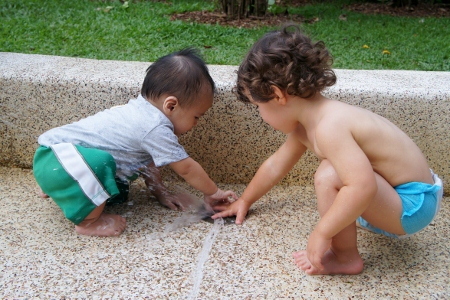 There were two little boys who were bullying Anya at the waterplay area. She had a bucket that she kept filling and emptying and they would wait till the bucket was full and then kick the bucket onto its side. If she was holding the bucket, they would knock it out of her hands.

I told them off and also taught her what to say and how to react if the boys came by again. Wish I could have advised her to clonk the two annoying boys soundly on the head with her bucket but violence is never the answer. 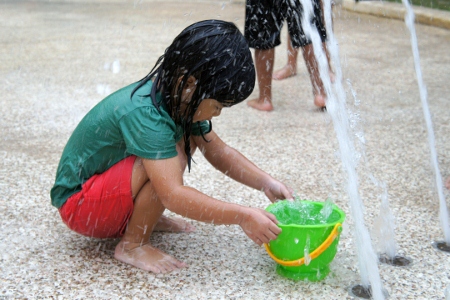 Anya and her bucket

After changing the kids into dry clothes, we walked across the suspension bridge (a few times) and went to the tree house. I didn’t think Anya would be able to climb up the ladder on her own but she did so without any fuss. 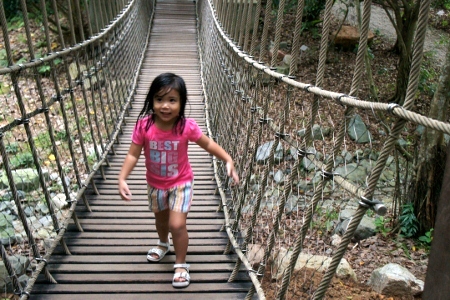 walking across without holding on to the sides 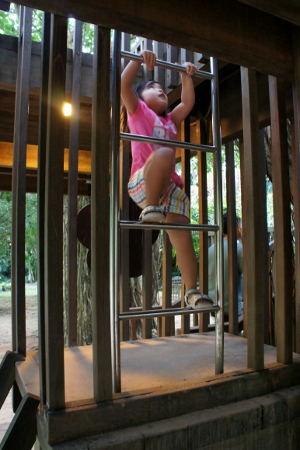 Jacob Ballas Children’s Garden is so much fun for the kids. Hope it won’t be another two years before we make a trip there again!