When Anya was Adam’s age, I would do a reflection piece for her every month. I have to confess that my second-born hasn’t quite received the same treatment! He’s 17 months old now and has been talking quite a bit more and I want to remember some of the things he’s been saying. 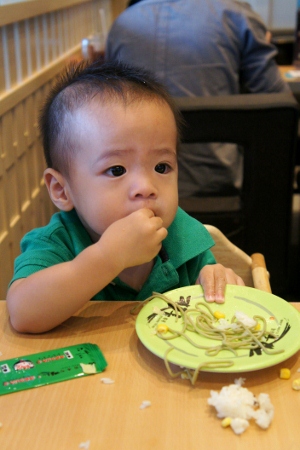 When it was Christmas time, he would say “Christmas star!” whenever he saw any Christmas lights. His current festive greeting is “财神到!” and he’s very fond of saying that when he sees CNY decorations. He likes to go “Tick tock” at the end of every line of Hickory Dickory Dock and he enjoys singing Twinkle Twinkle Little Star to himself. He’s learnt to say “大头, 大头” while clutching his head because of the little song his sister learnt in Chinese class.

He likes to go “Hello” on my phone and on anything that vaguely resembles a phone. He’s also happy to say “Bye bye!” and blow kisses. From off the top of my head, some of his other words are “apple”, “bear”, “bird”, “ball”, “balloon”, “bubble”, “car” and “手”. Yeah, it’s quite a mixed bag and he’s turning out to be quite a confused bilingual child!

He’s a really cheeky boy and loves to make people laugh. And he loves to eat but is a such a skinny minny! He also likes to feed himself and kicks up a big fuss if he’s not allowed to handle the food on his own. He asserts himself quite well and doesn’t let his sister push him around too much, which means a lot of shouting from the both of them when they are fighting over something. But he’s still quite a drama-mama scaredy-cat in many ways!