Wikki Stix are colourful pieces of yarn dipped in food-grade wax. They can be bent into different shapes and can stick to each other and to smooth surfaces. We were sent a few packs of Wikki Stix to review and I let the kids decide if they were fun to play with. We unleashed the Wikki Stix on the kids (or was it the other way around?) and sat back and watched them. 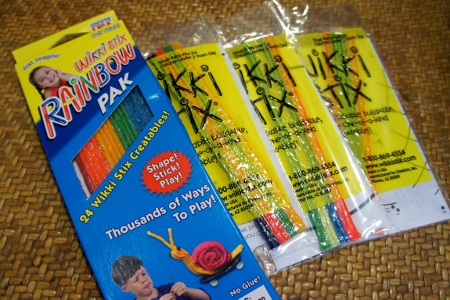 Anya gets to work

Asher spells out his name 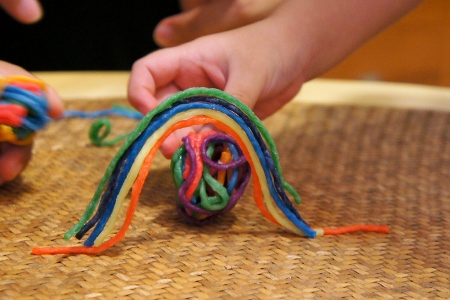 game where the Wikki Stix ball gets rolled under a rainbow

bracelets and rings for all the girls! 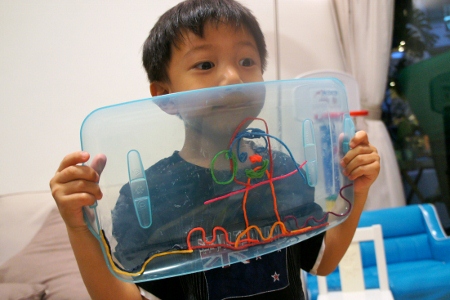 With the Wikki Stix, you are only limited by your imagination. The kids had a lot of fun and they used the Wikki Stix in various ways: form alphabets to spell out a name; create accessories such as rings, bracelets and headbands; make 3D objects like a ball and rainbow which became components for a game; decorate an Easter egg template and ‘draw’ a self-portrait!

I was initially sceptical because I thought the Wikki Stix were just like the fuzzy pipe cleaners/ chenille sticks commonly used for crafts. But the fact that they stick to smooth surfaces really opens up many other possibilities for how they can be used. I also think Wikki Stix are safer than pipe cleaners because the latter have wires inside that tend to poke out! The only thing I didn’t like about the Wikki Stix was the waxy after-feel they left on my fingers but we did a wet wipe test and that solved the problem!

I think Wikki Stix would be great for long road trips or flights: the kids can stick their Wikki Stix creations onto the windows! I now carry a few pieces around with me so I can use them to entertain the kids in the restaurant before our food comes. They are a lot less messy than crayons and a lot more interactive than a smart phone for sure! And since they stick to smooth surfaces, they don’t fall onto the floor so easily and my back appreciates that! I’ll definitely think about putting Wikki Stix as party favours in my next party goody bag.

Get 20% off online purchases! Just key in the coupon code ‘APR13‘ and click ‘Apply Coupon’ upon check out. This promotion is valid until 31 May 2013.

I’m planning to use the code to get the Bible Fun Kit! ;)

Congrats to the following people: Kathryn Ng, Rina Lim, Wenli, Sharon Ng and Juan! I will be contacting you shortly. :)

Disclaimer: I was given a few packs of Wikki Stix for review purposes. All opinions are my own.