A Midsummer’s Night Dream was my O-Level text so I know it pretty well and it’s a dream come true to watch it performed by Shakespeare’s Globe. I’d watched a few other productions of the play and had been somewhat underwhelmed each time, but I thoroughly enjoyed the performance by Shakespeare’s Globe and highly recommend it.

A Midsummer’s Night Dream is a comedy of errors reminding us that ‘the course of true love never did run smooth’. Hermia and Lysander love each other but she is expected to marry Demetrius. Helena is madly in love with Demetrius but spurned by him. Oberon and Titania, the king and queen of the fairies, are in the midst of a dispute but he still has the time to meddle in the affairs of the mortals and to play a trick on Titania. Comic relief is provided by a group of rustics preparing to perform a play within the play. Of course, everything is resolved and (almost) every one is happy by the end of the play.

I love the costumes worn by the fairy people. There are no pastel colours, glitter, or organza anywhere and instead there is a lot of leather and fur (and mud!) and everything looks very organic, earthy and raw. What also stood out for me was the physicality of the actors and that is used to great effect in the scenes where the young lovers are under Oberon’s spell and when the rustics perform their play during the Duke’s wedding. It was also interesting to see the young lovers losing bits of their clothing and becoming more exposed (both their bodies and their nature) in the forest. The play within the play performed by the mechanicals was so funny and it had the audience rolling in the aisles. 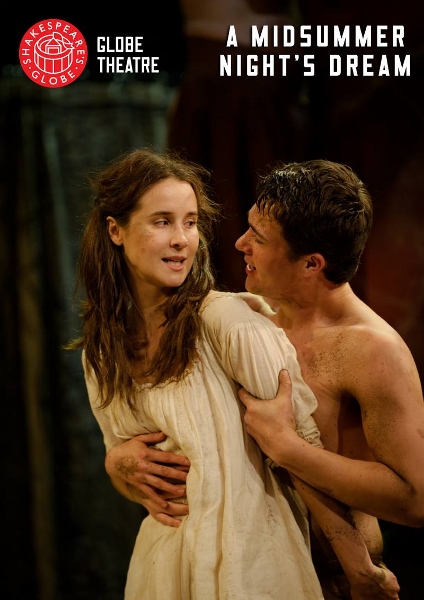 There are a few things that could have been better. For example, they attempted to inject a bit of local flavour by namedropping a Singaporean production (Forbidden City) but that was such a long time ago that it didn’t have any impact on the audience and completely went over our heads. I think they would have been better off referring to Dim Sum Dollies or something. Later, they had some of the characters speak a few lines of Mandarin and it came off as a bit pointless and there’s a significant number of people in the audience who do not understand Mandarin.

Overall, I loved the simplicity of the set, the music accompaniment, the energy, the comic timing, the pacing and the strong acting by most of the actors. If you are into Shakespeare, you should definitely catch A Midsummer Night’s Dream by Shakespeare’s Globe. This is as close as you will get to how Shakespeare is supposed to be done without actually making a trip down to London!