We caught The Magic Porridge Pot on Vesak Day! It was nice bumping into so many familiar faces there. Anya was quite excited to see some of her classmates seated near her in the audience. 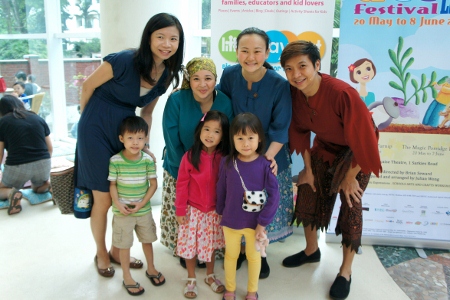 with the cast and some of her classmates

I didn’t really like the way the play started, with the cast members wearing masks and making random noises to communicate. I think it scared some of the younger kids (there was a fair bit of wailing) and didn’t add anything to the play. Some parts of the play were a bit wordy and slow-moving, e.g. when the mother was introduced and they were trying to establish that she’s a very forgetful character.

But on the whole, Anya and I enjoyed the performance. It was humourous, the songs were catchy and she was still singing bits of the songs a day later. The thief was convincingly portrayed and Anya would get very irritated whenever he appeared on stage, crossing her arms angrily and glaring in his general direction. I also liked that the cast stayed behind for photos after the show because it left us with a nice little souvenir of the performance!